This page describes the research and teaching activities of Gerry McInerney's research group in the Department of Microbiology, Tumor and Cell Biology at the Karolinska Institutet. 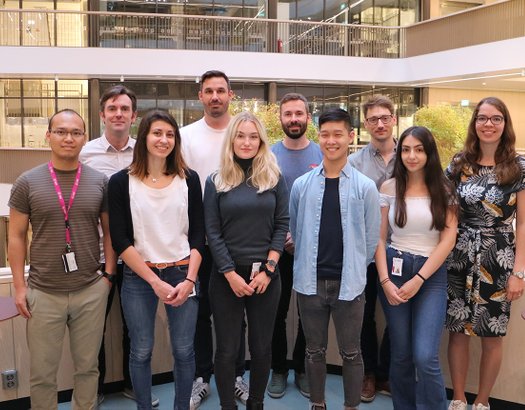 Gerry has joined Twitter, (@mcinerney_gerry). Future updates about the group will appear there.

Ben's latest paper, 'Sensitivity of alphaviruses to G3BP deletion correlates with efficiency of replicase polyprotein processing', has been published in the Journal of Virology.

We welcome to the group a new PhD student, Siwen Long. Very welcome!

Congratulations to Lifeng who successfully defended his PhD degree on 24th May. Very well done!

Our new work, 'Separate domains of G3BP promote efficient clustering of alphavirus replication complexes and recruitment of the translation initiation machinery' is now available at biorXiv

We are very happy to have received 2 large research grants this month:

Gerry recorded an episode of the Radioscience podcast (Swedish).

We have moved to our awesome new space at the Biomedicum building at KI. Looking forward to many productive years ahead!

A review article 'The Enigmatic Alphavirus Non-Structural Protein 3 (nsP3) Revealing Its Secrets at Last' by Ben, Lifeng and Gerry is now published in the Viruses special issue on Advances in Alphavirus Research.

Our latest paper on the mechanism of PI3K activation by alphaviruses in has been accepted for publication in PLoS Pathogens.

Congratulations to Leo, who has received a postdoctoral stipend from the David and Astrid Hagelén Foundation.

Congratulations to Ben, who passed his PhD half time control with flying colours on 1st December!

Some of Ben's microscopy images have been selected to appear in an art exhibition, The Invisible Body at Sven Harrys Art Museum in Stockholm. See an article on the KI website. And even this clip on Swedish morning TV.

Gerry is currently taking a 5 month sabbatical as a visiting professor at the Lee Kong Chian School of Medicine, Singapore.

Congratulations to Marc, who has received a postdoctoral stipend from the Swedish Society for Medical Research (Svenska Sällskapet för Medicinsk Forskning, SSMF)

Also, welcome to the group as a postdoctoral researcher, Dr Leo Hanke

We welcome Marc Panas back to the group as a postdoctoral researcher.

Cecilia Nordfors joins the group as a postdoctoral researcher.

Our latest paper 'Combined structural, biochemical and cellular evidence demonstrates that both FGDF motifs in alphavirus nsP3 are required for efficient replication' has just been accepted for publication in Open Biology.

Sayoni Chakraborty from the KI Biomedicine program has joined the group for a summer internship.

'Effects of an in-frame deletion of the 6k gene locus from the genome of Ross River virus', in collaboration with Suresh Mahalingam (Griffith University) in Journal of Virology.

An interview with Gerry about the Karolinska Institutet Summer Research School was published in Kemivärlden Biotech (Swedish).

Bastian's paper 'Differential PI3K-Akt-mTOR activation by Semliki Forest and chikungunya virus, dependent on nsP3 and connected to replication complex internalisation' has been accepted for publication in the Journal of Virology.

Bastian has been awarded the prestigious Jonas Söderquist Prize for Basic Research in Immunology and Virology 2015. Very well deserved!

Gerry's short article on 'FGDF Motif Regulation of Stress Granule Formation' has been accepted for publication in DNA and Cell Biology.

A review article, 'Methods for the characterization of stress granules in virus-infected cells', by Panas, Kedersha and McInerney has been accepted for publication in Methods.

Gerry travelled to Ventura, California to present a poster and a talk at the Gordon Research Conference 'Translation Machinery in Health & Disease'.

We have received funding for 4 years (2015-2018) from the Swedish Research Council (Vetenskapsrådet) for our work on 'Regulation Of Cellular Stress Responses In Virus Infection'.

Lifeng Liu joined the group as a PhD student.

Gerry travelled to Halifax, Novia Scotia to present at the 1st International Symposium on Stress-Associated RNA Granules in Human Disease and Viral Infection. A report from the conference has been published here.

Lifeng Liu has received a scholarship from the China Scholarship Council (CSC) to pursue his PhD studies in the group. He will join us in September. Very Welcome!

We have received a Karolinska Institutet Doktorand (KID) grant to recruit a new PhD student in the coming year. This position will be advertised in the Autumn Term.

Marc's latest paper, 'The C-terminal repeat domains of nsP3 from the Old World alphaviruses bind directly to G3BP',  has been accepted for publication in the Journal of Virology.

Dr. Bastian Thaa has received a 2-year postdoctoral fellowship from the Deutsche Forschungsgemeinschaft (DFG) and will join the group in 2014. Very Welcome!

A profile of Gerry's research and teaching activities was published in this month's issue of Autophagy.

Marc received two travel grants to present his work at the 23rd Annual Meeting of the German Society for Virology in Kiel, Germany (March 2013) and the 5th European Congress of Virology in Lyon France (September 2013).

Gerry was promoted to Associate Professor of Virology (Docent i Virologi) by Karolinska Institutets Docenturnämnden.