Although the biochemical isolation of SGs has proven difficult, a technique was developed which allows the cell-free formation of SG-associated proteins and RNA precipitates. Isoxazole is a small molecule known to induce the differentiation of stem cells (Sadek et al., 2008), and a biotinylated version (B-isox) was recently shown to precipitate a subset of RNA-binding proteins and RNAs in a temperature-dependent manner from cell lysates (Han et al., 2012; Kato et al., 2012). These precipitated proteins were highly enriched in SG-associated proteins and protein components of other types of RNA granules (Kato et al., 2012). Most B-isox precipitating proteins contain low-complexity (LC), unstructured regions of unknown function, and these LC regions are necessary and sufficient for their precipitation by B-isox. These studies led the McKnight laboratory (Kato et al., 2012) to propose that RNA granule assembly is mediated by a concentration and temperature dependent liquid/liquid phase transition. Although the mechanism of B-isox precipitation is not well understood, using B-isox precipitation to selectively precipitate SG-competent proteins can serve as a surrogate method for crude purification of SG components, essentially mimicking stress in vitro. The assay involves the simple addition of the B-isox to cell lysates, incubation with agitation at 4°C, followed by centrifugation to separate the precipitate and supernatant fractions and analysis by SDS-PAGE.

We used this technique to determine the B-isox solubility of G3BP1 and its binding partners in cells expressing EGFP-fusion proteins carrying the G3BP-binding motifs from SFV nsP3, described in (Panas et al., 2012). U2OS cell lines stably expressing low and high levels of EGFP-31-wt (clones 1 and 8, respectively) or a non-G3BP-binding version (EGFP-31-F3A) were lysed and subjected to B-isox precipitation in the presence or absence of RNase and analyzed using SDS-PAGE. Gels containing lysates, supernatants and B-isox precipitates were silver stained to confirm equal protein loading and to demonstrate that precipitation only occurred in the presence of B-isox (Fig A, B). Replicate samples were resolved on SDS-PAGE and transferred to nitrocellulose for immunoblotting (Fig 3C). The general profile of proteins precipitating with B-isox was similar to expected (Kato et al., 2012), and did not change appreciably with expression of either EGFP-31-wt or –F3A. RNase pretreatment of the lysates removed the high molecular mass bands (identified as RNA by their failure to stain with protein stains, data not shown), and resulted in the precipitation of a number of smaller bands identified as ribosomal proteins (data not shown). When pelleted material was analyzed by immunoblotting for SG proteins, we observed that CAPRIN-1, eIF3b and TIAR all precipitated equally well from cells expressing low or high levels of EGFP-31-wt or EGFP-31-F3A (Fig C). However, G3BP-1 and -2 precipitation was inhibited in cells expressing high levels of EGFP-31-wt (clone 8), indicating that the EGFP-31-wt/G3BP interaction alters it such that it is no longer “SG competent” by this criterion. This result is in agreement with our previous work showing that overexpression of EGFP-31-wt but not EGFP-31-F3A blocks the formation of SA-induced SGs (Panas et al., 2015b). 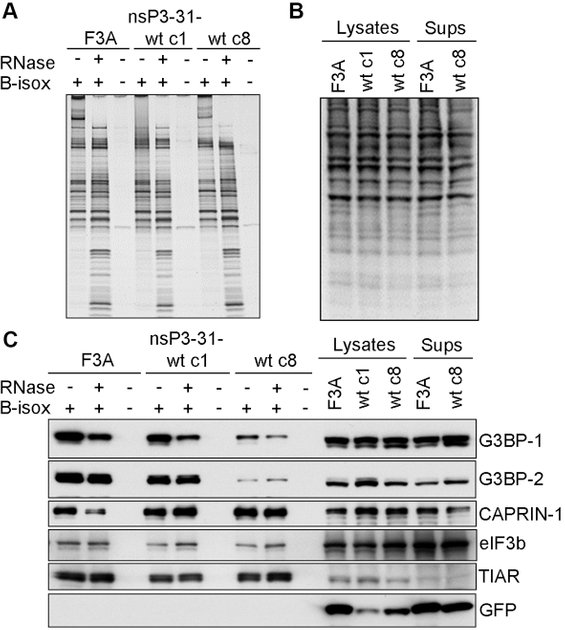