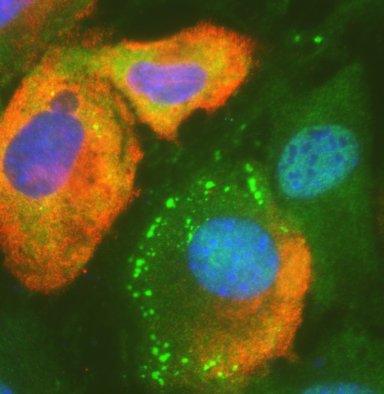 Stress granules (SGs) are dynamic sites of mRNA storage, which are formed in the cytoplasm of cells under many types of environmental stress. The sequestration of mRNAs into these translationally silent cytoplasmic foci contributes to the rapid redirection of translation from housekeeping proteins to heat-shock proteins and other stress response factors. In 2005, we showed that SFV infection induces the very transient appearance of SGs in the cytoplasm (McInerney et al., 2005). The timing if this corelated with the change in profile of protein production from host  to viral. In infected cells, SGs are induced by the protein kinase R (PKR)-dependent phosphorylation of eukaryotic translation initiation factor 2 but the cause of SG disassembly was not clear at that time. Since publication of that paper, transient SG formation has been revealed to be a common feature of many diverse viral infections.