A ribopuromycylation staining method can be used to visually quantify the levels of translation in cells using conventional fluorescence microscopy or immunoblotting. Puromycin is a broadly-acting antibiotic which blocks translation by entering the A site of both prokaryotic and eukaryotic ribosomes, and is itself transferred to the growing polypeptide chain, causing the disassembly of polysomes and release of the truncated polypeptide containing puromycin instead of a normal amino acid at its C-terminus. Treatment of cells for very short times with 10 µg/ml puromycin leads to cessation of translation and the release of the puromycinylated nascent chains from polysomes. David and colleagues showed that a puromycin-specific antibody could be used with immunofluorescence microscopy to detect puromycinylated proteins and thus to determine the relative levels and distribution of translation in cells (David et al., 2012). While other in vivo protein labeling techniques (notably, incorporation of azido-modified amino acid analogs, e.g. Invitrogen “click-it” chemicals) can be used to label and detect protein translation in situ, they require prestarving the cells in methionine-free media, which may perturb normal infection kinetics and other aspects of metabolism. Puromycin labeling has several advantages: it is compatible with a broad range of drugs (including sodium arsenite and Pateamine A), it is very quick, and compatible with immunostaining for other SG markers.

Grow cells on coverslips and perform infection experiment so that cells are at approximately 50-90% confluency at time of fixation.

Incubate cells in complete medium containing 10 µg/ml puromycin for 5 minutes at 37°C. Note that David et al. recommend adding 91 uM (50 ng/mL) emetine in order to limit the extent of puro incorporation to 1 molecule of puro per mRNA (David et al., 2013). Use cells without puromycin incubation as a negative control.

Rinse the cells 1-3 times with 1ml of PBS

Permeabilise in MeOH or Triton as appropriate (see section 3.1) and process for immunofluorescence using puromycin-specific antibody (Millipore MABE343 mouse monoclonal at 1/1000 dilution), counterstaining with other antibodies as appropriate.

We have used this technique to determine the relationship between transient SGs, the newly assembled viral RNA replication complexes and the rate and location of protein synthesis in SFV-infected cells at different times post-infection. Mouse embryonic fibroblasts (MEFs) were infected with wt SFV at a multiplicity of infection (MOI) of 0.5. At various times post infection, 10 µg/mL puromycin was added to the media for 5 minutes immediately prior to fixation and staining for nsP3, TIA-1 and puromycin. Representative images are presented below. In mock-infected cells, TIA-1 is predominantly located in the nucleus, while the puromycin signal is strong and not located in any specific cytoplasmic compartment. As we have described before, at approximately 2-4 hpi, TIA-1 translocates to the cytoplasm and is transiently detected in SGs. However, in region of the cytoplasm where viral protein or RNA is detected, SGs are no longer visible (McInerney et al., 2005). At this point, the total translation rate in the infected cell is drastically reduced as compared to mock-infected cells. Later, as the SGs are entirely disassembled and viral RCs are distributed throughout the cytoplasm, translation rate is increased again. These data demonstrate the strong correlation between the assembly/disassembly of SGs with the shut-off of host cell translation, thus illustrating the power of this technique for the study of localized translation (or its absence) in virus-infected cells. 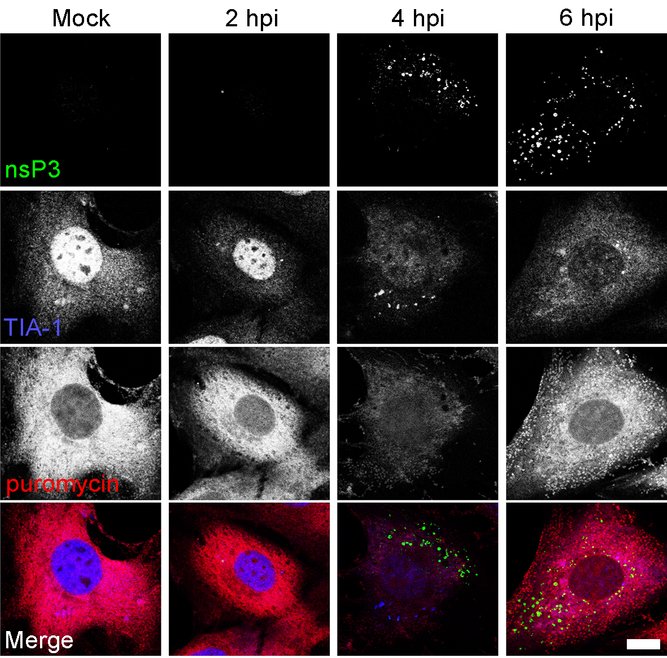