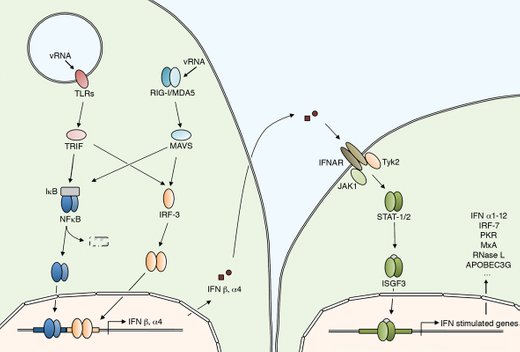 The Type I Interferon response is a central player in the innate resistance to viral infection. The power of this system to restrict viral spread is illustrated by the number and diversity of mechanisms that many different viruses have evolved to counteract and subvert this system (McInerney and Karlsson Hedestam, 2009)

We showed that the main determinant of IFN evasion in SFV is non-structural protein 2 (nsP2). Infection of cells with viral mutant (SFV-RDR) which lacks a nuclear localisation sequence in the nsP2 protein, provokes the production of significantly increased levels of type I IFN and other pro-inflammatory cytokines. Our work suggests that this effect is independent of the general shut off of RNA and protein synthesis in SFV-infected cells and we are working to understand the mechanism by which this is achieved.

The interaction between alphaviruses and the type I IFN system is a focus of ongoing work in the laboratory.